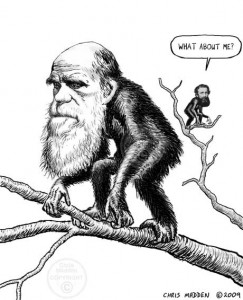 Charles Darwin caricature as a cartoon ape, with an Alfred Russel Wallace cartoon ape in the background, based on the famous Darwin ‘monkey’ caricature of 1871.

This illustration is based on a redrawn version of a famous caricature of Charles Darwin – however I’ve added in the background the figure of Alfred Russel Wallace. Wallace thought of the theory of evolution by natural selection independently of Darwin, however he gets little credit for it, with Darwin’s name being the only one in general public awareness.
The hundredth anniversary of Alfred Russel Wallace’s death in 1913 is to be marked by events under the umbrella title of Wallace100, with events at the Natural History Museum, London, and elsewhere