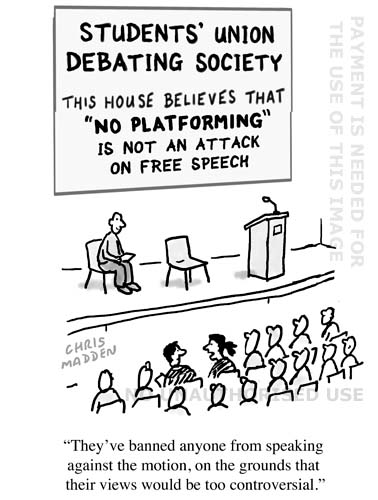 “No platforming” – the movement to deny a debating voice to speakers who’s views may be offensive to some of the audience.

This cartoon is about the phenomenon of denying a platform in debates for speakers who’s views may be found offensive by some of the audience.
The phenomenon is particularly prevalent in universities.

“No platforming” can be seen as a form of censorship masquerading as a virtue. It is built on the premise that people have the right not to be offended.
This may be a worthy aim, but it’s very much open to abuse, as the ‘right not to be offended’ can easily become a means of stifling debate.
Apart from anything else, the airing of controversial views are crucial to the health of democracy.